Perhaps many can relate to having a loved one, who has violently rejected Christ for years. That was my mother who later in years developed Alzheimer’s – a deadly brain disease that robs one of the decision making ability eventually resulting in death. Prayers continued for her and to my surprise,  God had other plans that resulted in a miracle as a special mother’s day blessing to our family.

As long as I can remember my mother was a very private person and hard to know.  It wasn’t until her husband’s death and when she began to have memory problems that she opened up to me.  She had heard the gospel many times and always became agitated, rejecting her need for God.  The fact is that the only time I had heard her speak the name of Jesus Christ was when she was swearing, which was quite frequent.  She was diagnosed early with Alzheimer’s’ in 1994 and as the disease took control, many hours were spent in prayer on her behalf.  Both my brother, sister and my children shared our prayers and concern for her salvation as the disease began eating away at her brain.

It was Mothers’ Day, 1998.  The night before I had received an emergency call from the teacher of our Seniors Class asking me to do the lesson in Sunday school the next day. (Our home church was Harvester Baptist Church in Columbia, MD  harvester.org)

As I was preparing the lesson, I had another call. This time it was from my mother.  She was now in the middle stages of Alzheimer’s’ and had trouble focusing on anything for more than a few minutes so the call surprised me. She asked if she could come to church the next day so I sent my son, Billy and his fiancé Becky, to pick her up fully expecting that she will have forgotten and not want to go. (This happened more often than not).

As Sunday school started on Mothers’ Day, I realized I had left my lesson at home and so I planned on substituting my own salvation testimony.  When I looked up, my mother walked in and sat down in front of me.  This was too bizarre!! Think of it, my mom’s first Sunday school class was being taught by her daughter??  As I read my opening question it struck me how coordinated the timing had been to bring us both to the same place.  The opening question was:  “Have you ever been frustrated when praying for someone for a long time and feeling like your prayers would never be answered?”  (That had been my feeling for 19 years praying for my mother’s salvation).     The class went well even when I shared my personal salvation testimony plus her own husband’s salvation decision a year before he died. Amazingly she didn’t take offense and seemed very alert.  This is impossible!  Her attention span was no more than 15 minutes at this stage and unable to answer simple questions, yet she was over an hour and answering in full sentences.  God must be doing a miracle!!

We then went into the church service where mom always enjoys the choir and music, but normally dozes off during the sermon. This special Sunday we had a visiting evangelist who clearly and simply covered God’s plan of salvation.  Mom was sitting next to me looking at my Bible.   I had “accidentally” picked up my bulky large print Bible instead of the normal small print edition, but it turned out to be the right one for that day. Mom kept hitting me saying, “show me where it says that in the Bible” as she was riveted to the preacher’s message. At the end there was an invitation and prayer but she didn’t move or respond.  I wondered if she was still coherent because it was now over 2 hours, way past her attentiveness span.

At the end of the service, instead of diving for the door, she visited with all the people.  I put her in the foyer with Bill and Becky in order to bring the car around. (She had taken a fall  and I didn’t want her to follow me down the stairway).  It took a while to get through the crowd and there were unusual delays at the pickup lane.

When I finally returned, everyone was gone except Bill and Becky, who were in the corner praying (which I found odd).  Mom was holding a lively conversation with Pastor Simpson. Now I knew why Bill and Becky were praying.  As I walked up I realized she was responding to questions on how to be saved. Pastor began carefully explaining God’s plan of salvation from the book of Romans.   This was not the first time she heard it and I expected her to cut him short and turn to leave.  But she didn’t.

Pastor explained God’s love for her, why her sin separated her from God and that God sent His son, Jesus Christ, to provide the one way to bridge that separation by willingly going on the cross for her, dying and coming alive again.  Now she had a choice to make: to believe in Christ who paid for her sins and ask to receive His gift of salvation or to walk away and reject it.  In my mind I thought she would react as she had in the past by getting angry and saying “I’m not a sinner” or “Jesus Christ was just a man”, but she still listened without objection. I was amazed! Then to my surprise, Pastor gave her an opportunity to back out or think about it later.  I held my breath for a long time.

Mom looked at me and finally said, “Do you have time to wait?”  “Wait for what, Mom?” I responded.  “I want to pray and be saved”, she said.  I had been waiting for 19 years for what I thought was impossible.  Pastor slowly and quietly led Mom in the sinner’s prayer.  For the first time I heard her admit she was a sinner and she prayed using Jesus name without swearing and finally ask for forgiveness and the gift of everlasting life only He can provide.  We rejoiced at her decision- it was a miracle!  God restored her faculties for over 3 hours and she made her choice.

Even though she slipped back into the Alzheimer’s confusion moments later, there was evidence of her changed life.  No more swearing for one thing and her reaction to the name of Jesus was one of peace.  One time she told me she knew she was saved because she prayed with Pastor and reminding me I was there. In the short time she was herself and sat with me in church, she wanted to read the new Bible we had given her – writing notes on the side.  The months were brief before she again melted into a vegetative, non-communicative state – yet she smiled when we prayed with her.

We all rejoice in this Mother’s Day miracle.  Mom went to be with her Lord, January 2003.  Sometimes we never know what decisions are made before the final end of a life and I am so grateful God allowed us to be a witness to His transforming power.

Luke 1:37 “For with GOD nothing will be impossible.” 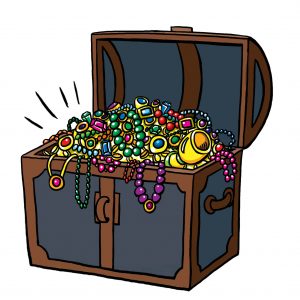 All Responses should be sent via e-mail to:Dr. Nancy (email: Toolkitministries@yahoo.com)

This entry was posted in Testimonials. Bookmark the permalink.